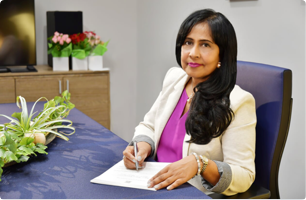 Perth based Dr Jaya Krishnan is the Founder and Developer of Jayapathics, a groundbreaking new system of Homeopathy. She is one of Australia’s most eminent homeopaths. Jaya’s mission in life is to make a significant contribution to the planet by dramatically improving the population’s overall health, wellbeing and happiness. Her qualifications and vast experience speak for themselves.

Jaya qualified in Homeopathic Medicine and Surgery from A.H. Medical College, a world renowned establishment in India and trained at the Central Research Institute of Homeopathy, Kurichy, as well as the Government Homeopathic Hospital in Calicut. She lectured at the well-known S.O.A.S college in Brunei and established herself as a Homeopathic Consultant.

Jaya migrated with her family to Perth in 1990 where she established the Jaya Homeopathic Centre and the Joondalup Asthma Clinic. She also joined a number of leading clinics in Perth as a Homeopathic consultant.

She was a Senior lecturer in Pathology, Medical Diagnosis and Homeopathy for more than 10 years at the Perth Academy of Natural Therapies.

To help understand Jayapathics and it’s philosophy, Jaya has written a book Jayapathics – Beyond Homeopathy which explains Homeopathy and gives volumes of patient testimonials who in their own words confirm the amazing success of Jaya’s treatment protocols and – in essence – Jayapathics itself.

To introduce Jayapathics to the wider public globally, Jaya has also developed a unique Diagnostic and Prescriptive Computer Program titled Jayapathics – Towards a Healthier World along with Jayapathics Remedies – Quantum World of Healing, which are first of their kind in the world. This was formally launched in 2002.